To create, enable and sustain the most future ready workforce in the nation.

We power Iowa’s possibilities by connecting workers to opportunities and employers to workforce solutions. 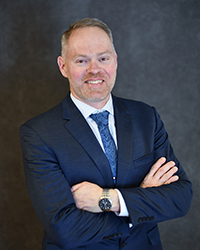 Ryan joined Iowa Workforce Development in June of 2009 as a Workforce Advisor. In August of 2015 he became the Unemployment Insurance Division Administrator overseeing the unemployment insurance program for the state. In January of 2019, Ryan assumed the role of Deputy Director where he oversaw legislation and business engagement. Today, Ryan’s primary focus is on connecting Iowans with opportunities and promoting all things Future Ready Iowa. Ryan also hosts the Iowa Workforce Development Mission: Employable Podcast!

Ryan is a Veteran of the United States Navy where he worked as Flight Deck Director on board the aircraft carrier U.S.S Abraham Lincoln. He was responsible for more than 10,000 launch and recovery missions.

Ryan holds a Bachelor’s of Arts Degree in Business Management from Simpson College and is a lifelong resident of Iowa.

Rod Roberts was appointed by Gov. Kim Reynolds to serve as labor commissioner effect March 1, 2019. He previously served as the director of the Iowa Department of Inspections and Appeals for eight years.  Roberts also served in the Iowa House of Representatives for 10 years.  A native Iowan, he was born in Waverly and raised in Zearing.

The Labor Services Division is responsible for the administration of state and federal statutes related to public health, safety and workplace issues. Iowa’s Occupational Safety and Health Act administration is located within the division. With an emphasis on voluntary compliance through education and preventive services, the Labor Services Division continues to implement the vision of creating a “culture of safety” throughout Iowa’s labor force.

Appointed by Gov. Branstad and confirmed by Iowa Senate April of 2015. Cortese brings to Iowa Workforce Development 34 years of private practice experience with Huber Law Firm where he specialized in workers' compensation and personal injury law. Cortese Received his law degree from Drake University and undergraduate degrees in journalism, history and political science from Indiana University.